Left for the Fatima bint Mubarak

Forward by the President

It is with great pleasure I announce the launch of the Fatima bint Mubarak Motherhood & Childhood Award, signifying the profound interest of the United Arab Emirates in promoting excellence and creativity in the fields of motherhood and childhood.

This award aims to honor international figures for their distinguished achievements with regards to issues of reform and the affairs of women and children, in addition to encouraging scholars to conduct specialized studies and scientific research enriching the literary components of the UAE’s Humanitarian Library with studies analyzing this significant category in society - motherhood & childhood.

efforts to provide them with a suitable environment.

It illustrates the boundless interest of the United Arab Emirates in matters related to motherhood and childhood is intended to encourage individuals, public and private entities to conduct scientific research and specialized studies in both fields.

This award will inspire institutions and public and private entities in the UAE to provide the necessary services for the welfare of mothers & children and to harmonize the role of mothers towards their families and society. It is also intended to provide a motivation for institutions and entities here and abroad to improve the quality of the services that they offer. International personalities demonstrating outstanding achievements in these fields will also, therefore, be honored.

The award will highlight the welfare needs of mothers and children and will seek to motivate children to seek to achieve distinction and to strive for innovation.

I hereby extend an invitation to all institutes, public and private entities, researchers, specialized university professors & students and children in the UAE to participate in a concrete and substantial way in the activities which this award is designed to recognize and honor, seeking thereby to deliver the best possible services to mothers and children and to seek to enhance their well-being and prosperity.

Forward by the Secretary General

The launch of the Fatima Bint Mubarak Motherhood and Childhood Award, now entering its first round, is a qualitative initiative aimed at motivating the public to provide fundamental benefits for the well-being of mothers and children.

The keenness of Her Highness Sheikha Fatima bint Mubarak - Chairwoman of the General Women’s Union, President of The Supreme Council for Motherhood & Childhood and Supreme Chairwoman of the Family Development Foundation – on launching this award, highlights her profound concern towards mothers & children. The launching of this award is viewed as an effective way to draw the attention of community members, public and private entities in the UAE to the need to ensure the provision of deep and real attention to all matters affecting motherhood and childhood, in addition to the need to develop an appropriate environment for the children of our future.

The award aims to highlight the UAE’s interest in motherhood & childhood matters worldwide, encouraging individuals, public and private entities in the UAE to conduct scientific research and specialized studies, to inspire them to provide the necessary services for the welfare of mothers & children and to ensure that the role of mothers is fully in harmony with their families and society.

The UAE has become a country that offers an unparalleled example of care for maternal and child welfare, as shown through its participating at international events and the developing and implementing of programs, seminars and workshops that seek to meet the needs of mothers and children. It is our belief, in that context, that the collection of literature that, together, comprises the UAE’s Humanitarian Library requires further research and studies to be undertaken on issues related to motherhood and childhood.

The award will focus on the categories of:

It will also seek to identify leaders in the fields of ‘Best Community Contribution in the field of Motherhood & Childhood’ and ‘Best Initiative in the Development of Children’s and Youth’s Talents’.

Children will also play a great part in this award as they will be able to participate in all categories for various initiatives, such as developing smart services and applications suited to this age.

The contestants will be granted ample time to submit documents, with help on offer to assist them in presenting their best projects and initiatives. In addition, the appropriate efforts will be made to promote recognition of the importance of conducting studies and research concerning motherhood & childhood.

The award’s objectives are to: 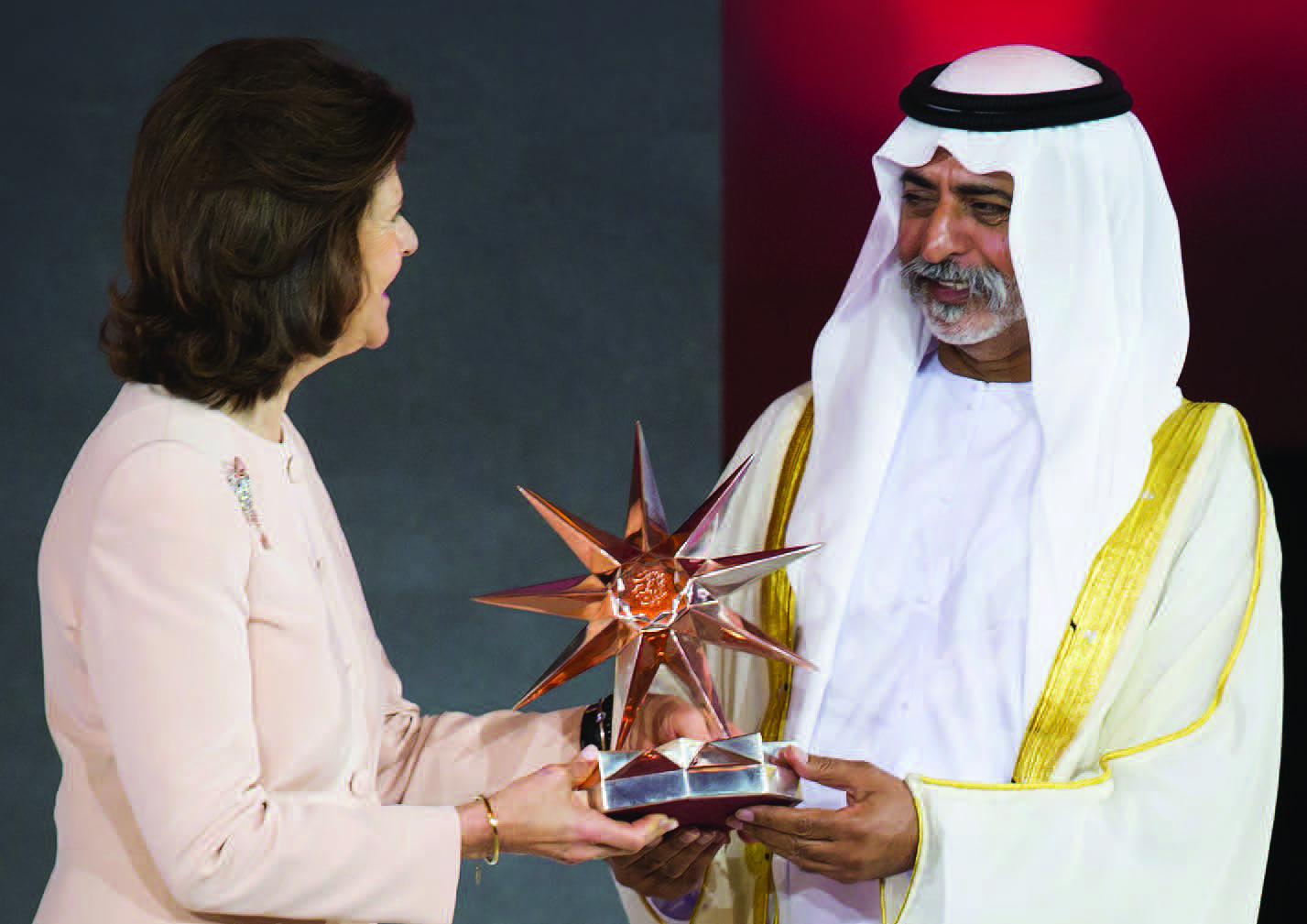 Her Majesty Queen Silvia of Sweden 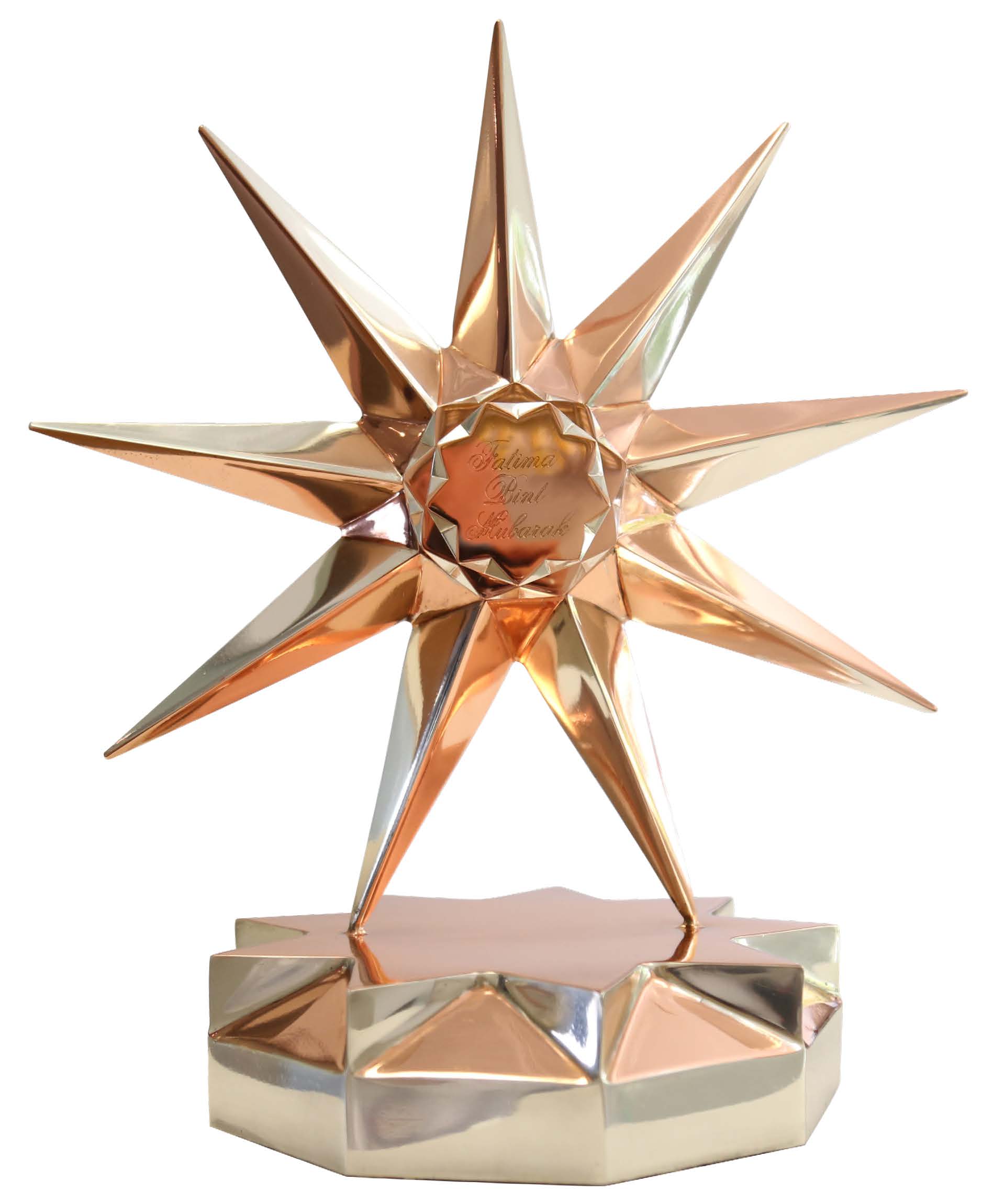 The award consists of nine pointed arms which meet at the core of the circular center engraved with Her Highness Sheikha Fatima bint Mubarak’s name as she is the preeminent provider of motherly warmth and compassion, conveying blissful meanings of motherhood - “Mother of the Nation”.

It symbolizes the genuine significance of motherhood and childhood, where the arms stem from the core representing the 9 months of which a mother carries her unborn infant, illustrating the beginning of the extraordinary bond between a mother and her child – a beginning forming profound affection since inception. These arms also reflect the association and strength of that relationship with the family composition.